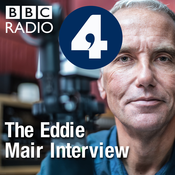 von
CIA Moscow Veteran: Putin is a consummate liar
John Sipher spent 28 years with the US National Clandestine Service. Mr Sipher spoke to Eddie Mair about his life undercover, why he's kept a brick from Osama Bin Laden's house, torture, and the Sergei Skripal poisoning.
I talk to my dead friend
Artificial intelligence is already a big part of our lives, whether or not we are aware of it, and it will only become more significant. But could it ever help us with our most tender human emotions, like when we are grieving? Eugenia Kuyda is a tech entrepreneur and when her friend Roman Mazurenko died suddenly, Eugenia used machine conversation to bring him back to life. She told Eddie Mair about the app she created to do this called Replika, which describes itself as an artificial intelligence friend that's always there for you. (Photo: Roman Mazurenko and Eugenia Kuyda Credit:Eugenia Kuyda) .
'I have been across the whole spectrum of crime and I've paid a price for it'
On New Year's Eve four young men were stabbed to death in separate incidents around London. It brought the total number of fatal knife attacks in the Capital to 80 in 2017. Many of these incidents are due to gang rivalries. Jermaine Lawlor was a member of a gang in East London. He was first arrested at the age of 11, but tells Eddie Mair that seeing "friends being murdered, made me think about my life". Now 26, he's a youth worker and has set up a service to help those that remind him of his younger self. (Photo:Jermaine Lawlor Credit: Jermaine Lawlor)
How to make sure your last wishes are respected
What would you like to happen if you become very ill or severely incapacitated? What can you do now to make sure your wishes, whatever they are will be respected should that time come? Professor Jenny Kitzinger is from the Coma and Disorders of Consciousness Research Centre, Cardiff University which researches how best to ensure that incapacitated patients have their last wishes respected. Jenny's sister Polly had a car crash in 2009 which has left her with devastating brain injuries. Her family knew she would not want life-prolonging treatment but as Jenny told Eddie Mair, "without an advance decision (document) we found that those views were not respected". (Photo: Professor Jenny Kitzinger, Coma and Disorders of Consciousness Research Centre, Cardiff University. Credit: J Kitzinger)
'History is about the future, politics is about the past'
Sebastian Balfour, a historian and Emeritus Professor of Contemporary Spanish Studies at the London School of Economics, was PM’s trusted guide to events in Catalonia before, during and after the disputed independence referendum. In an extended interview, Professor Balfour talks to Eddie Mair not about his day job, but about his fascinating life including being rescued as a little boy from a Japanese internment camp and living in America in the1960's where he bought and sold antique cars. (Photo: Historian Sebastian Balfour Credit: Sebastian Balfour)
Mehr anzeigen