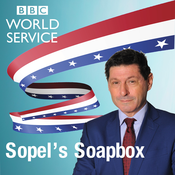 von
The Final Sopel's Soapbox
President Donald Trump has just completed his first week in the Oval Office. He's been busy - swiftly signing a handful of executive orders, undoing some of President Barack Obama's policies, and picking fights with the press over reports of inaugural crowd sizes. What other challenges does Donald Trump face? Political author Henry Olsen contributes. Also on the programme: the reasons for the Women's March on Washington. Politics reporter Anthony Zurcher presents the final episode of Sopel's Soapbox. We might be back at some stage in the future - but for now, our elections coverage is over as we concentrate on the new administration. Thank you all for listening!
Bracing
If you listen to Donald Trump's speeches, it's all about deals. So how will this play out in the world of international diplomacy? Jon Sopel talks to Steven Erlanger, New York Times London bureau chief, about how the world is bracing for a Trump presidency, and who says,"Everyone is very anxious and some countries are angry and in general everyone is holding their breath and saying to themselves, oh it'll be all right, because he's just a Twitter nut and it's not policy yet." Also on the programme: can Donald Trump unite the United States?
Out With the Old
Barack Obama leaves with a squeaky clean reputation - in terms of personality, at least. In terms of policy President Obama himself says "The United States of America is the one advanced nation on Earth in which we do not have sufficient commonsense gun safety laws even in the face of repeated mass killings." Jon Sopel visits Charlestown, South Carolina, to meet religious leader and civil rights organiser Elder James Johnson to find out whether things had changed for African Americans over the last eight years. Elder Johnson says, "When he said he's the President for all the people, and we ask ourselves here in South Carolina are we better off now than we were eight years ago. And I think things still the same. I'm disappointed, but I'm glad to see a black President in my lifetime, but I'm very disappointed in some of the things he said and some of the things that he did." Also on the programme: the dramatic scenes at President elect Donald Trump's first press conference.
Adversaries... Continued
President-Elect Donald Trump made it clear throughout his campaign that he’s no lover of the press – he banned the Washington Post from attending rallies, threatened to expand libel laws, and has even ditched the media pool. One of his recurring rallying cries called journalists the most dishonest people he’s ever encountered. Some are wondering how – and whether – he’s going to co-operate with the White House Press Corps as President. "No president since Nixon has been so open in their contempt and hatred for the news media," says former investigative correspondent Mark Feldstein, author of Poisoning the Press. This week Jon Sopel talks to Feldstein about the last president who was open about his loathing for the media – President Richard Nixon. Also on the programme: former ABC White House correspondent Ann Compton on presidential transparency.
Conflicts of Interest and Russia
"Mr Trump is choosing to be wilfully ignorant of events around the world," says Tim Weiner, a journalist specialising in security issues and author of Legacy of Ashes, a history of the CIA. He speculates about Russia's influence on the US election and how it sought to disrupt American democracy, as well as gathering intelligence to use against Hilary Clinton and to discover information about Donald Trump to save for later use. He adds, "If we have a president of the United States living in a state of vincible ignorance, then the world will be more dangerous than it already is." Also on the programme: with its close proximity to Russia, Alaska's residents share what they think of the idea of the nation affecting the US election.
Mehr anzeigen