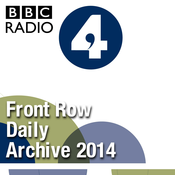 von
People of the Year - Part Two
In the second programme celebrating the arts highlights from 2014, John Wilson hears from Benedict Cumberbatch, Timothy Spall, Keira Knightley and Eddie Redmayne as they discuss the challenges of playing real life figures in film. Dolly Parton, Joan Baez, Iggy Pop and Emma Thompson talk about the impact of age on their chosen careers as Daria Klimentova explains why she decided to retire from the world of ballet. Michael Sheen discusses his passion for Dylan Thomas in this anniversary year, and Simon Schama and Hilary Spurling enthuse about Rembrandt and Matisse. And pop newcomers, Sam Smith and Young Fathers reflect on their successes over the last year.
People of the Year 2014 - Part 1
John Wilson talks to the people who have had exceptional years in the worlds of the arts, culture and entertainment in 2014, in the first of two special programmes. Carey Mulligan discusses making her west end debut in Skylight, and the thrill of taking to the stage after her many film roles. Gillian Anderson, lauded for her performances on television in The Fall and on stage in A Streetcar Named Desire, talks about playing two very different women. Two of the biggest selling musicians of 2014, Ed Sheeran and Paolo Nutini, discuss the song writing process and award winning authors Hilary Mantel and Lionel Shriver on the art of writing short stories. Kristen Scott Thomas and Helen McCrory, who stunned audiences with their stage performances in Greek tragedies Electra and Medea, on the visceral experience of playing tragic heroines. Designer Tom Piper and ceramicist Paul Cummins explain why their poppies installation at the Tower of London, which marked the 100th anniversary of the start of WWI, struck a chord with millions of people and artist Marina Abramovic on her bravest installation yet. And, following two of the biggest comebacks of 2014, John Cleese remembers the Pythons' reunion and Adrian Noble discusses directing Kate Bush. Presenter: John Wilson Producer: Olivia Skinner.
The rise and rise of Event Cinema
Kirsty Lang investigates the flourishing phenomenon of so-called event cinema. Plays, musicals and operas in major cities have become available throughout the country on the big - and sometimes small - screen in local cinemas. Eric Felner, the producer of Billy Elliot the Musical tells of his delight at the performance in September that topped the cinema box office, beating Denzel Washington's The Equalizer into second place. David Sabel, the Head of Digital at the National Theatre responsible for NT Live, analyses the success of Frankenstein, War Horse and many other shows. Helen McCrory talks about what the live screening of Medea felt like and Lesley Manville and Richard Eyre describe having their theatre production of Ibsen's Ghosts filmed. Front Row hears from some who fear the impact of event cinema on local theatre and on touring; Lorne Campbell of Northern Stage and the playwright Alan Ayckbourn voice their concerns. And what is the future of event screening? Presenter: Kirsty Lang Producer: Sarah Johnson.
The Art of Book Cover Design
John Wilson explores the art of book cover design and meets artist Suzanne Dean, who has been responsible for more Booker-winning covers than any other designer. Writers Ian McEwan, Tom McCarthy and Audrey Niffenegger discuss the art that represents their words and Telegraph books editor Gaby Wood provides a reader's perspective on what makes a book stand out in a bookshop. As more of us than ever read books on e-readers, is beautiful design the key to the survival of the physical book?
Sir Alan Ayckbourn
In conversation with Kirsty Lang, Sir Alan Ayckbourn discusses his long and prolific career that has seen him, at the age of 75, premiere his 78th play - Roundelay. Sir Alan is one of this country's most celebrated playwrights. His ability to write and stage his tales of British middle-class domestic disharmony in ever more inventive ways has endeared him to a national audience. However, with his plays performed worldwide, he has a devoted international audience as well. He talks to Kirsty Lang about Scarborough, his adopted home, his love of event theatre, and his belief in theatre's power to connect people - whether they want to be connected or not.
Mehr anzeigen